Had three horrible mats on a very frightened cat, so a shaver or anything that made noise was out of the question. All mattes are gone and cat is much happier now - ...and so is owner! 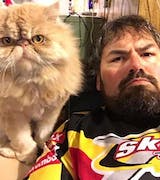 This works really well at keeping the mats out of my little fur baby. He does not shed so it something I have to stay on top of and this tool works very well and does not seem to cause him any discomfort when I use it.