We love this! Lily is a hound, we don't have a fence and she is a handful!! Fencing our property would've been so costly that we thought we'd give it a whirl. It's so great I recommend it to everyone I know!! She is wearing two collars the wireless fence and a training collar 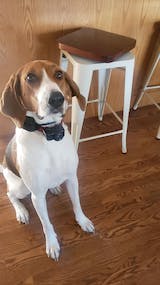 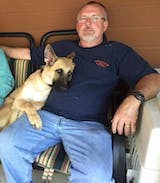 This dog, is the biggest derpiest derp you will ever meet. He’s going through his adolescence and has decided to rebel against his mom. We purchased this cause he’s too hard headed for his own good and screaming pizza ( pizza is the food item we use to trick him into coming back home like a good boi, but he doesn’t get the aforementioned pizza) at him sometimes, almost never works anymore. We took him for a leisurely stroll, by leisurely we mean a massive case of the zoomies- and a tacit refusal to listen to his mom. He broke perimeter- luckily he came back safely as there is no penalty for coming back inside the perimeterI told my daughter - he’s too hard headed to let him off lightly- he’s going to have to learn the hard way. She turned it up to max level. It was just a matter of time before someone came to the house and he thought he would chase the car down the drive way His mom knows exactly where it begins beeping (thanks to those handy dandy flags) and also where it becomes a little more aggressive.Cerberus now knows too.He ignored the gentle beeping and even picked up speed He now knows that he shouldn’t go further than the beeps. Dogs aren’t meant to turn cartwheels- which is what Mr. Man did. Right before he decided to come back to the porch and lay his butt down I know some people will think is cruel. But the dog is safe- not stuck in a kennel or pen for the bulk of his days and he knows the rules. Which is, I think, a win for all of us. Sometimes the best lessons are the ones we learn the hardest. 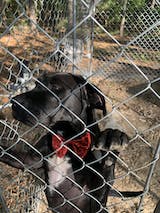 I've tried at least 5 systems and this one is by far the best one. The battery life is amazing 👏. It's been a week and stillNot needed to charge. The sound it makes gives my dog a chance to stop before shocking him. The lowest level was good enough. I absolutely love it. Well worth the money 💰🤑👌😏 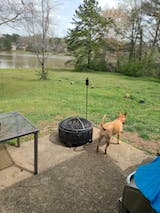